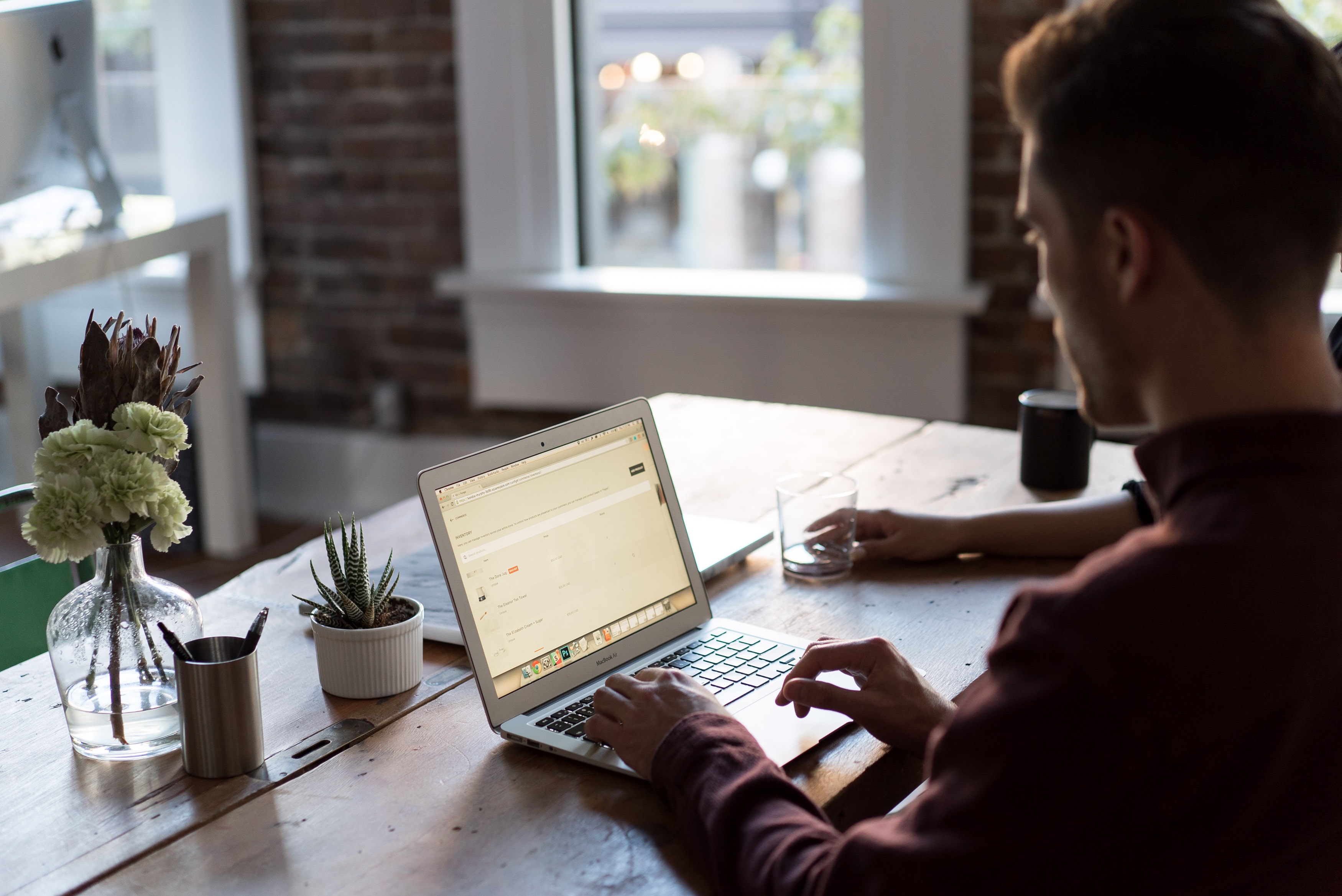 So you want to be an entrepreneur.

You’ve been wanting to create your own thing for some time now. The drive is higher than it’s ever been. It’s time to start going to every networking event you can find, and getting some facetime with the brightest minds in the startup scene.

Before you go, it might be wise to catch up on some of the common startup lingo that’ll most likely come up. After all, if you can swing a conversation with a startup superstar you wouldn’t want to have everything they say flying right over your head would you? 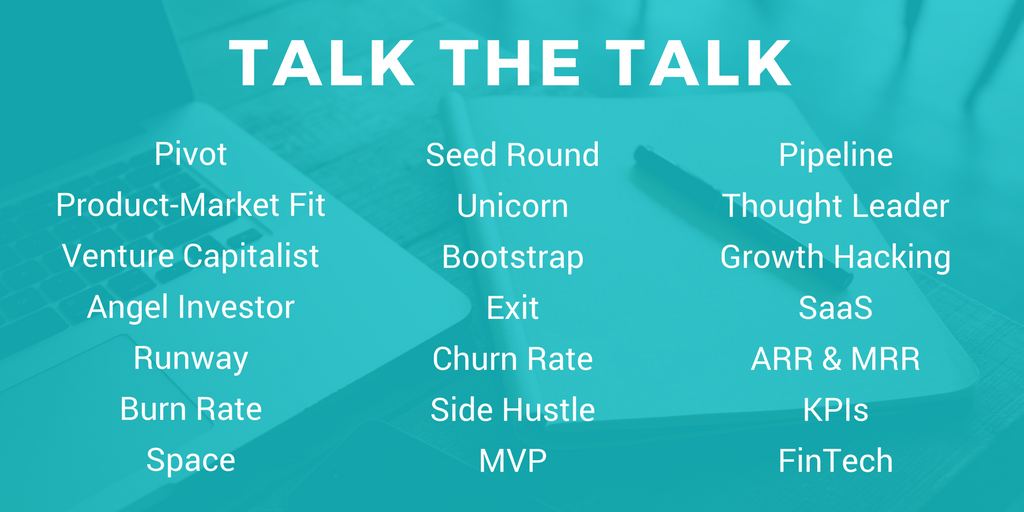 This one’s a classic. If you’ve had a conversation about startups, there’s a good chance someone’s said the word pivot.

To pivot is to revamp your business model when you realize the current one isn’t working out too well. Think changing the direction of your business—be it a running with a new revenue model or a new product. Essentially, it’s typically one of the steps required to achieve the almighty product-market fit.

Which leads us to term number two: Product-market fit. The light at the end of the tunnel.

According to the wise words of Marc Andreeson:

“Product-market fit means being in a good market with a product that can satisfy that market.”

A venture capitalist (or VC) is focused on identifying and investing in high potential startups in exchange for a share of the company. They typically get involved when a company is in their Series A round.

VC’s invest in multiple promising companies with the expectation of seeing decent returns on a handful (3x to 5x) and massive returns (10x or more) on a few.

But where does the money come from? Just ask The Balance:

“The majority of venture capital (VC) comes from professionally-managed public or private firms who seek a high rate of return by (typically) investing in promising startup or young businesses that have a high potential for growth but are also high risk.”

Angel investors are a bit different.

Unlike VCs, the investments these groups or individuals make are coming straight from their own bank accounts, and they’re usually investing more in the founder, rather than just the business.

They come in during the early-stages of growth (see seed funding) to help get a startup off the ground and give them the runway they need to take their first steps.

The amount of money you have to work with during the early-stages before you run out and have to close the doors for good.

Essentially, you take the amount of money you’ve raised, measure it against your monthly burn rate, and boom you’ve got your runway.

Outrun your runway and the lights may well be going out.

The amount of money you’re burning through each month.

If you have a ton of investment capital but a sky high burn rate, your lifespan may be shorter than you would like. The runway might look a lot shorter than it could.

This one is more of a conversational buzzword. You’ll hear it left, right and centre at pretty much every networking event you find yourself at.

In startupland, a space is similar to a field. It’s the startup way of explaining what market you’re in, what your focus is or what industry you’re competing in.

“Because calling the field in which they’re operating an industry, vertical or even genre is too hard, entrepreneurs like referring to their company as being a player in a given space.”

If you want to dig deep into what makes up each round, when you might want to start each round and who tends to invest at each point, there’s plenty of reading to do there.

The short and sweet piece you need to know is the order and the timing.

First comes the seed stage. This is the time to nurture the idea and bring it to life. Next is the A round, with a focus on developing a business with long-term potential. Then comes the B round, where it’s all about building out the business and growing. Round C is the time to scale. You’ve built a profitable, successful business and you’re in the processes of scaling, scaling, and scaling some more.

If you’re looking for the mythical flying horse, you may want to check here.

In startupland, there are two definitions, if you can call them that:

Bootstrapping is for the entrepreneur who isn’t necessarily wanting to (or ready to) bring in a ton of investors early on.

All it entails is building a business with very little capital and fronting costs using personal finances or revenue from the business if there is any.

It’s the perfect way to run your side hustle if you’re not ready to fully commit, and can definitely be a successful business model if you can handle the personal financial risk.

This is the fun part for any investors that jumped on board.

You’ve created something so awesome and disruptive that some big behemoth wants to scoop it up. Get ready to grind through the exit process, but make sure to pop a bottle of champagne or three to celebrate.

Churn is bad. You want this to be as low as possible.

Essentially, it’s the amount of people who are either unsubscribing or cancelling their accounts—customers no longer being customers.

If you’re churn rate is high, you need to bring in that many more new customers each month just to stay where you were last month, let alone continue to grow.

In startupland, the hustle never stops. If you’ve got the entrepreneurial gene, which I’ll assume you do if you’ve gotten this far, you need to embrace the idea of a side hustle.

Side hustling is what can help you reach your entrepreneurial goals and launch your own business, without the terrifying feeling of quitting your 9 to 5 and wondering how you’ll be paying the bills next month.

All it really means is spending a chunk of your free time working on your own potential business ideas, or doing some freelance work to reach guru (intentionally not a listed buzzword) status and expand the weekly income levels.

If you’re still wondering why a side hustle might be a good idea, check out this post by digital marketing extraordinaire Ross Simmonds.

MVP in the startup world doesn’t mean Most Valuable Player like you might be used to hearing. It stands for Minimum Viable Product.

In other words, the bare minimum of your product that you can use to prove that people will actually be interested in what you’re making.

Mikael Cho, Founder/CEO of Unsplash & Crew, started with an MVP for both and lays it out rather simply:

“A Minimum Viable Product (MVP) is a product that has the minimum set of features to prove the most essential hypothesis in your business.”

Your sales pipeline, which you’ll probably either hear referred to as your pipeline or just pipe, is essentially the amount of potential customers/deals you have in progress that haven’t yet closed.

It gets much more detailed when you take into account deal size (closing Apple is usually better than closing companies that aren’t Apple) and how far along the sales process they are, but the short and sweet is deals waiting to be closed.

A thought leader is someone who always seems to be two steps ahead of the current trends in whatever industry (or space) they specialize in. They share their thoughts and talk about these emerging trends before they’ve actually emerged, and people view them as authoritative and influential.

Everybody wants to be a thought leader, so get used to hearing people say it’s a goal of theirs. That said, it’s a pretty solid goal to have.

A hot topic as of late. Some people are incredibly pro-growth hacking, others not so much.

It definitely has it’s flaws, and there’s a lot of boxes you should try to tick before diving in, but it’s hard to argue against the results a successful growth hacking tactic can bring.

Greg Poirier of CloudKettle has been contributing to the conversation for some time now. Check out his recent post for Salesforce about the phenomenon.

This one’s pretty simple. SaaS is short for Software as a service.

It’s easier to write and it’s what all the cool kids are saying. SaaS companies do exactly what it sounds like they do: Offer their software platform as a service.

Some examples? Check out Proposify, Dash Hudson, Swept and HeyOrca just to name a few. Oh, and you may have heard of Uber, AirBnB and Salesforce.

The cash flow. Revenue that you can anticipate will be recurring on an annual (ARR) and monthly (MRR) basis.

You likely won’t be able to predict this 100% accurately, but it’s a solid baseline for predicting what your cash flow is going to look like.

Key performance indicators (KPIs) drive some of the world’s most well-known brands to succeed.

They’re used to track your company’s progress and performance (surprise, surprise) over time as it relates to your specific industry or niche.

FinTech is the quick and dirty way of saying financial technology.

FinTech has been hot lately. There’s a good chance you’ll see it littered throughout Entrepreneur, Inc or Forbes in the next couple months. 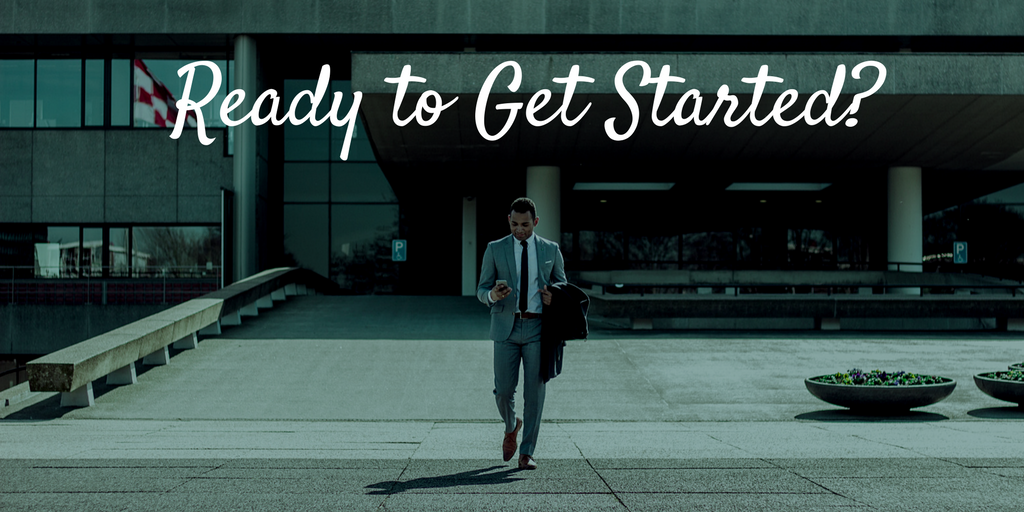 Now Over to You…

Startup terms change like Nova Scotian weather. One day everyone wants to be a unicorn, the next it might be something completely different. It can be tough to stay in the loop.

Use this list as a starting point. Build up a solid understanding of these key terms and you’ll be good to go at the next networking event you grab tickets for.

Ready to get started?

Apply now for Network Membership with Volta. It’s free, and we’ll keep you in the loop on all of the hottest networking events in the city.