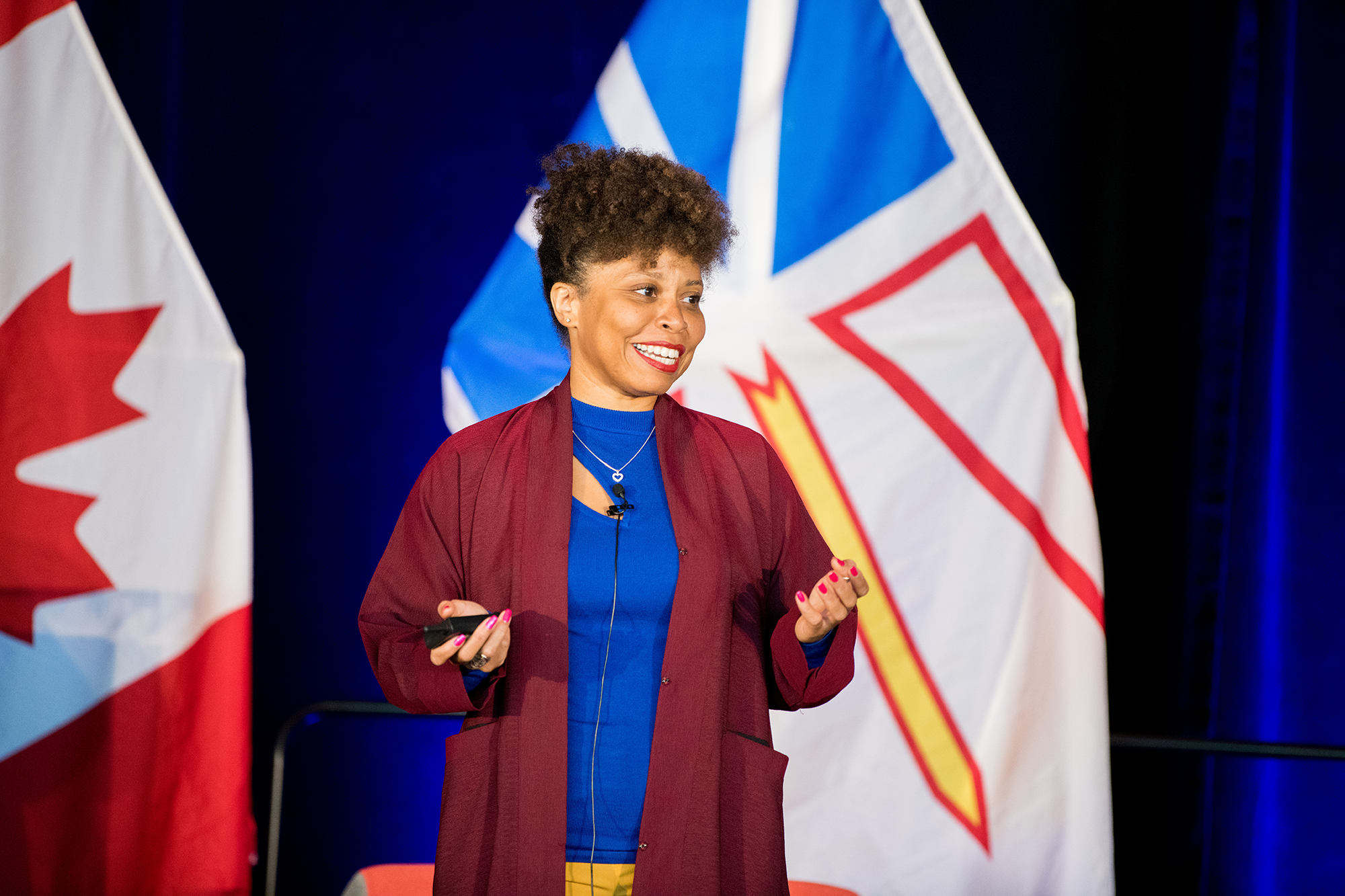 Friendly, helpful, kind, and environmentally conscious – these are just some of the attributes Tash Jefferies, Founder of Diversa, says Atlantic Canadians are known for and should leverage when developing their companies and scaling globally.

“We have some strong values that we carry with us that, I think, make us very important to the global ecosystem when it comes to working in technology and innovation, and in the startup world,” Jefferies explained.

Jefferies, who’s also Digital Strategist and Growth Coach with 500 Startups, spoke at last month’s Innovate Atlantic Conference. She grew up in Halifax’s North End and knows a thing or two about developing a global competitive edge as an Atlantic Canadian living abroad.

Currently living in  Saudi Arabia, Jefferies has visited countless cities and countries around the world, building relationships and networking as she went. Throughout her travels and experiences, she realized there are unique aspects about Atlantic Canadian culture that can help position people and companies from the region as world class leaders in innovation.

Here are some key takeaways from her talk on how Atlantic Canadians can develop an international edge:

Get out of your Atlantic Canadian comfort zone

For many people, especially those who were born and raised in the region, Atlantic Canada can provide a sense of security and familiarity that can be tough to leave. However, Jefferies said it’s important to get out of your Atlantic Canadian comfort zone to create new opportunities for growth and development.

“I know for all of us who are from here, sometimes it can be hard to get out of the province because we do have an attachment with home; we’ve got family here, we’ve got community here, we’ve got friends here, and we got a lot of resources here,” Jefferies said. “But I would urge all of you, if you can get a chance, take a month, three months, six months, and just go and travel – just go somewhere.”

When you visit a new place, you’re often presented with new perspectives and cultures that help you understand and think differently about the world as an innovator. Jefferies credited travelling as a game changer for her career path.

“I started travelling a lot,” Jefferies said. “One of the reasons that I always try to travel is that there’s a different perspective that we get from visiting other cultures, being in a place where English isn’t the first language, and understanding what there is to know that makes us all human beings and makes us connect on a very basic level. On top of that, travelling also allowed me to come home and realize there are so many things we do here on the East Coast that are extremely valuable.”

In late 2015, Jefferies and her husband moved back to Nova Scotia and settled in a small, rural town. A few months later, they took a trip to San Francisco for an event, and that decision opened up a number of opportunities that led Jefferies to the work she’s doing today.

“We left and got to San Francisco, we didn’t know anybody, we had no resources, we had no community, we had no network. I don’t even think we had one contact in San Francisco when we went. But that experience – we stayed for six months – it was transformative.”

In the span of six months, Jefferies said she met people from various incubators and accelerator programs, connected with investors and fellow founder, and learned more about what was happening in the global innovation marketplace. Ultimately, it was the decision to take a chance and visit a new, unfamiliar ecosystem that led Jefferies to the work she’s doing today in Saudi Arabia.

Then, bring your new knowledge, perspectives and connections back

After you’ve travelled to a new place and made new connections, one of the best actions you can take to strengthen the Atlantic Canadian innovation ecosystem is to bring your learnings and expanded network back to the region.

“When you do go, make sure to come back,” Jefferies said.

She explained that being at the second annual Innovate Atlantic was a full circle moment for her. “I was sitting in this room like you are last year. For me, being able to come back and share my experiences with you is huge.”

Jefferies spoke about how she tries to mentor other founders and people looking to build technology as much as possible when she’s home. She encourages others who have had the opportunity to travel to share what they have learned with people who could benefit.

Use our inherent friendliness to your advantage

As Atlantic Canadians, we often find ourselves striking up casual conversations with complete strangers. Our friendly and inviting attitude can be a major competitive advantage in business, too.

“We have a natural way of being able to just connect and communicate with people on a human level, and it’s one of these things that allows us to be able to make connections and relationships,” Jefferies said.

She explained how our friendliness helps us stand out, particularly in environments where people aren’t accustomed to the level of warmth and openness many Atlantic Canadians possess.

“For those of you have been in a bigger city, whether it’s New York or San Francisco, or even Toronto and Vancouver, a lot of times, you end up being around people who – as soon as you meet them – will put a wall up because the first question is, ‘what do you want from me?’,” Jefferies described.

Our ability to break down those walls and build relationships is a talent Atlantic Canadians have that should be appreciated and integrated into your strategy for developing an international edge.

Embrace our environment as a source of inspiration for innovation

There is no doubt that sustainable innovation will play a major role in addressing environmental problems in the future. According to Jefferies, Atlantic Canadians are well suited to leverage this global opportunity because we are surrounded by nature on a daily basis. Innovators and entrepreneurs in the region should look to the environment as a source of inspiration when aiming to develop products and services that create global impact.

“We naturally get and live sustainability, which is where the biggest and best innovations are coming from within the next 25 years,” Jefferies said. “I think we have a unique connection to be able to create technologies and innovations that can actually support the world and solve a lot of the environmental crises that are happening right now.”

No matter where they are in the world, Atlantic Canadians bring East Coast hospitality with them wherever they travel. Whether you’re born and raised in the region or have recently made Atlantic Canada your home, these insights from Tash Jefferies are sure to help you leverage the natural strengths we have here.

What other characteristics make Atlantic Canadian companies internationally competitive? Let us know in the comments below or tweet at @voltaeffect using the hashtag #AtlCan.