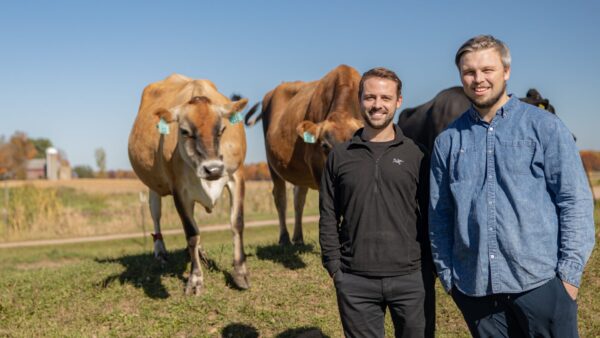 One St. John’s, Newfoundland-based company has made some big Mooves in the last few years –and they’re not letting up anytime soon.

Milk Moovement, an innovative dairy software built to enhance the raw milk supply chain, was founded in January 2018, and won the Volta Cohort Pitch Competition in November 2018. Now, they are expanding into the United States, and are the lone Canadian startup enrolled in  Techstars. But that’s not all– they are keeping their foot on the gas to achieve more goals and celebrate more wins in the very near future.

“When you have momentum building, it’s easier to keep it going, so we’ve just tried to never lose that momentum, and we’re always looking at what’s next,” Robert Forsythe, CEO of Milk Moovement, said.

“We hear a lot of people saying: ‘How did you do that in 30 days?’ and I think it’s a build up – we’re always pushing harder and harder.”

Back in 2018, Jon King, now Chief Operating Officer at Milk Moovement, grew tired of manually entering his data every day at the dairy co-operative he was working at. Transferring scanned copies of documents into excel, making payments, running invoices and inputting data is a lot of manual labour, and made him realize that there had to be a better way.

It turns out, there is.

“Errors are made when you’re entering your own data. It’s just a lot of work, so (Jon) decided he wanted to make a custom software to basically automate that whole job–so that’s what we’ve done.”

Months after they began building their software solution, the magnitude of the opportunity began to sink in when they were selected as one of five companies to receive $25,000 in investment as part of the Volta Cohort competition; as well as mentorship, access to expert advisors and office space in November 2018.

“It almost gave us the validity to do it, and it gave us permission to act like a startup. I think we just kept that idea of ‘There’s a hunger, and we’re not going to stop until we take over the world,’”Forsythe said.

This idea is surely starting to come to fruition for the Milk Moovement team, as they recently expanded, with an office opening in Minneapolis, Minnesota, which will help them launch their software in the United States.

It was also announced in September that they were accepted to be a part of the 2020 cohort of Techstars – a global platform for investment and innovation that connects entrepreneurs, investors and corporations, and provides a variety of incubator and accelerator programs.

Milk Moovement joined Techstars’ Farm to Fork Accelerator, which focuses on the food and beverage value chain. The company is finding their experience at Techstars to be incredibly valuable to their overall growth and development, with a mission to continue expanding.

One of Forsythe’s favourite components of Techstars is “Mentor madness,”–which consists of meeting with 120 mentors, for 20 minutes each, over a three-week period.

“They blocked off five hours in our calendar for about 15 days, and we met with 120 people. So that’s a ride, for sure – and it’s definitely madness,” Forsythe said, with a laugh. “You get really good at that 60-second pitch, because you need to, but you also get really good at becoming coachable and taking advice, and just finding commonalities.”

Forsythe and King have met with several people that are trying to shake things up in the food and agriculture industry, and they have had some great conversations with a variety of Founders that have provided them with lots of key takeaways and insight.

One of many lessons that they’ve learned as the lone Canadian company in Techstars, is to ask for everything that they need.

“We get told ‘don’t be Canadian around here,’ even when we’re pitching a large client and we are throwing around what the pricing can be,” he said.

Another interesting part of participating in the Farm to Fork Accelerator, is that although the food and beverage scene may have a different lens on it due to COVID-19, there are a lot of eyes on the industry right now.

“I think it’s just an exciting time for food. I think we have a lot of attention on our industry, and I think there’s a lot of weight on the shoulders of the innovators in this space to get it right and to build a future around it,” Forsythe said.

When asked about Milk Moovement’s future, Forsythe said they currently have a 90- day goal to jump up their revenue. “We’re just shy of half a million, and our goal is to hit a million.”

Milk Moovement isn’t shy about reporting on their goals and stats either. Forsythe and the team see their regular sharing of updates as something that continues to keep them accountable.

“We like to be really public with our goals and with our metrics, because then we strive to make sure we achieve them,” he said.

This mentality, Forsythe said, is attributed to his experience at Volta.

“When we had to report on things every month, and we had to have our meetings in front of advisors, and in front of mentors, and say what you did and what was going wrong and what was going right – that’s where we started getting into the mentality of ‘Let’s be super open about what we’re trying to achieve, and let’s have people call us on it if we don’t achieve it.’”

Similarly, at Techstars, there’s a need for companies to be transparent about their goals, so that they can get the most out of the program. When mentors at Techstars asked what they needed help with, Forsythe was sure to express Milk Moovement’s overall goal of doubling their sales revenue.

To learn more about Milk Moovement, visit their website at milkmoovement.com.