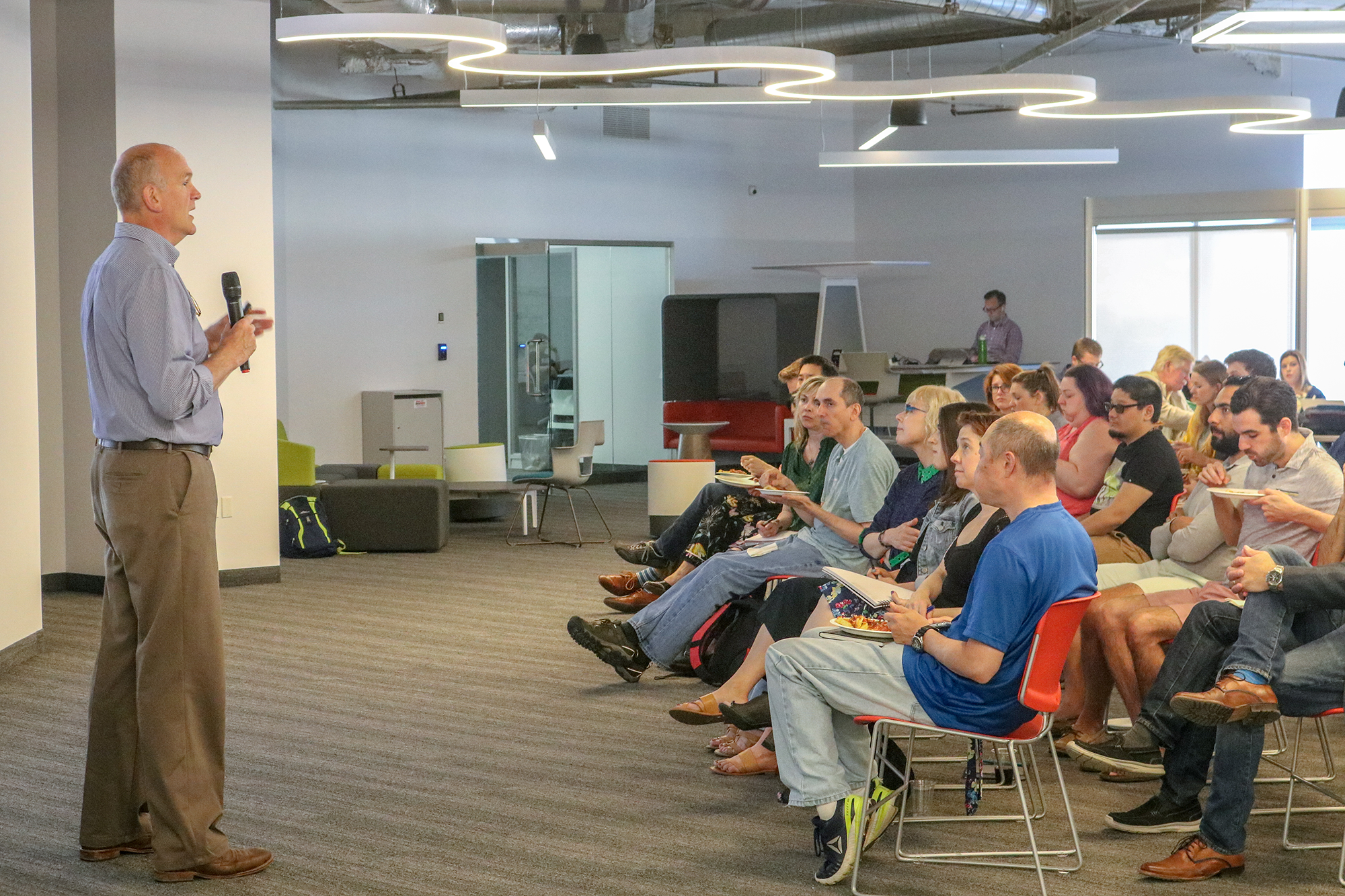 In 2018, Atlantic Canada was home to more than 500 startups – a number that has steadily increased over the past couple years, according to Entrevestor lead, Peter Moreira.

“We’ve seen steady growth of this community in the six years that we’ve been doing this exercise,” Moreira explained. “We carry it out by asking startup founders to answer a survey. We about 157 responses last year, and at Entrevestor, we carry out about 200 or more interviews a year through our journalism.”

Below are some key findings from his research and trends Moreira shared about our regional startup ecosystem.

Understanding the types of companies in the ecosystem

Before diving into the insights his research uncovered, Moreira explained what Entrevestor considers a startup.

“We’re talking about high growth, innovation companies. They’ve got to meet three criteria; they have to be commercializing technology, they have to be owned by Atlantic Canadians mainly, and they have to be building a product for the global market,” Moreira said.

He explained how Entrevestor categorizes companies through data collection to better understand what phase the startups in our community are at.

“We divide companies into various categories and we are methodical in the way we do this. Age has nothing to do with what we consider a startup. There are companies – like LED Roadway Lighting, like Mariner in Saint John – that have been going a long time; they’ve got millions upon millions in revenue and they’ve got large staff. They are – for all intents and purposes – corporations, but they still meet our three criteria, so we include them as established companies,” Moreira explained.

“Below them, we have our elite companies,” he said, adding that local companies such as Dash Hudson, Proposify and ABK Biomedical would fit that category. “Generally speaking, these are companies with more than $1-million in revenue, they’ve raised more than $2-million in funding and they have 10 or more employees,” Moreira stated.

Following elite companies, there are the scaling companies. This category looks for similar metrics as the elite companies, but instead requires $500,000 in revenue, $1-million in funding and five employees.

Other company categories include rookies, general and zombies.

“There are still too many zombie companies – the walking dead in our community, and they tend to soak up human resources most importantly, but also financial resources,” Moreira said. “So if companies close down, it usually means that developers or other personnel are given to the strong growing companies in the region.”

For his research, Moreira categorizes zombie companies as startups that are more than two years old, they may have won a competition or been accepted into an accelerator, but have had very little activity in terms of hitting milestones, and haven’t made any noise in the media.

We are killing more failed startups

While zombie companies are still a prevalent issue in the ecosystem, there is some positive news: there are more failed startups.

“We track failures each year – it’s really difficult to do. Founders don’t phone us up and say ‘hey we just shut down our company,’” Moreira said. “But, what we’ve seen is a marked increase the last two years in the number of failures per year – and that is good for the ecosystem,” he added.

You may wonder how celebrating failure benefits the startup community. That’s a fair question. In the startup world, failing fast means resources aren’t being absorbed by companies that aren’t growing, and high calibre founders and their staff can move on to a new idea, or another high growth company that would benefit from the talent.

We are getting better at ‘starting up’

During his presentation, Moreira shared how he saw more companies forming last year than what was recorded in previous years.

“There was a step change in the formation of companies in the last few years, and what we’ve found is that, through various groups in all of the universities around the region, through Volta, startup hubs, et cetera, we’ve got really good at grasping an idea, seeing if there is a product-market fit and getting to a place where entrepreneurs can say ‘ok, this is now a company.’”

The increase of companies forming in the region represents the growth that the startup ecosystem in Atlantic Canada is experiencing. The growth may also indicate that the supports put in place, such as programs and funding resources, are making a difference in creating an environment where entrepreneurs and innovation-driven enterprises can thrive.

“We’re now up over 100 companies a year. When I look at things like the Spark and Sprint competitions, we estimate there will be roughly that number again this year,” Moreira said. “What will be interesting in the next few years will be to see if that number accelerates.”

One of the most impressive, and arguably the most valuable aspects about the Atlantic Canadian startup community is its ability to drive job creation.

“The Atlantic Canadian startup community has been an employment-making machine,” Moreira said. “It’s been growing by leaps and bounds. We figure that there was about 23 per cent growth last year.”

Moreira cited research by Patrick Hankinson, Partner at Concrete Ventures, who compiled statistics about the state of startup jobs in the region; Hankinson’s research estimates that there were more than 850 jobs created by Atlantic Canadian startups in the first half of 2019.

“That growth did not slow down in the third quarter. The fact that Verafin just raised $0.5-billion in funding is going to lead to more hiring in St. John’s. I think that the hiring is accelerating,” Moreira said.

“Revenue growth is – without a doubt – the hardest data to come up with,” Moreira explained. “We’re really happy that about 120 of the companies that we surveyed provided revenue details.”

While it can be tricky to come up with a definite figure, whether that’s because of missing data or the variety in the type of answers received, it’s estimated that the overall revenue growth for startups in the region falls somewhere close to the 75 per cent mark, of which Moreira believes is “pretty healthy growth.”

“The strongest growth comes from the companies that really have their product-market fit, they have sales teams in place and they probably have better than $500,000, better than $1-million in funding.”

When the Entrevestor team analyzed the revenue data, they found that roughly 13 per cent of the companies that provided revenue figures had sales of more than $1-million last year. That number is consistent with the previous year’s data, according to Moreira, but one that he hopes to see rise when he reviews data for 2019.

If you follow Canadian startup funding deals, you may already know that 2018 was a great year. According to Canadian Venture Capital and Private Equity Association (CVCA), the year-end total for VC funding in Canada reached $3.7 billion.

“Last year overall was a record year for VC funding in Canada, but what’s interesting from our point of view is that even though Canadian funding did better than ever before, Atlantic Canada accounted for a larger proportion of VC funding than ever before,” Moreira explained. “So while things went really well in Canada last year, they went even better in Atlantic Canada.”

The funding stats from 2018 were impressive, but Moreira believes it will pale in comparison when this year’s data is finalized. In his presentation, Moreira cited raises by New Brunswick-based companies, such as Resson, Introhive and Sonrai Security, as leading the funding numbers last year.

“That is all going to be old hat when we do sums for this year,” Moreria said, referring to 2018’s funding record.

One notable funding announcement that Moreria said will drastically impact the data for 2019 is the $515-million deal that St. John’s-based Verafin closed in September. The deal holds the record for largest VC funding round in Canada, and certainly is the biggest deal our region has seen yet.

The startup community is starting to ride the oceans wave

In recent years, there has been a lot of excitement about the ocean innovation sector in Atlantic Canada. Initiatives like Canada’s Ocean Supercluster and spaces like the Centre for Ocean Venture and Entrepreneurship are proving to be driving forces in the ocean sector.

“I disregarded oceans for the startup community as of two years ago because I heard a lot about it. People were talking about it, but I didn’t see startups actually being generated,” Moreira admitted. “In 2017 that changed, and so now we have a subsector of the community that is doing ocean businesses.”

He described how we are now seeing startups like ReelData AI, which began as two Dalhousie University graduate students wanting to start an artificial intelligence-focused business.

“ … Their professor said, ‘Why don’t you look at ocean space,’ and they came up with an AI solution that viewed video in aquaculture,” Moreira shared. “ReelData is now in Techstars AI. It’s one of the exciting companies in this city.”

Looking to the future

There is no doubt that the past few years have seen incredible growth in Atlantic Canada’s startup community. Much of that change has been driven by increased collaboration and collective action among key players across the region.

“The ecosystem is evolving for the better. It’s becoming more regional. Because of the Atlantic Growth Strategy, we’re getting more collaboration between the startup hubs in various cities and between the provincial groups – you’re seeing this especially in life sciences,” Moreira said.

As the ecosystem continues to evolve and mature, Moreira thinks organizations and supporters in the region will shift their approach when it comes to helping startups.

“What I think is going to be coming next from the people I talk to is a look at how to help startups become corporations with training in governance, training in things like human resources, public relations, and these sort of corporate things that all companies need,” Moreira said. “As somebody explained to me, there needs to be more training on how you can get C-level people to work more effectively in training managers below them who then can train their foot soldiers in repeatable processes.”

Moreira said there’s still work to do in that regard. “We’re not there yet. Too many of our companies, even our good companies, are still in the mode where we have a very skeletal management structure, and I think there is going to be more emphasis on that in the coming years.”