Volta - Tackling the refugee crisis with careers in tech 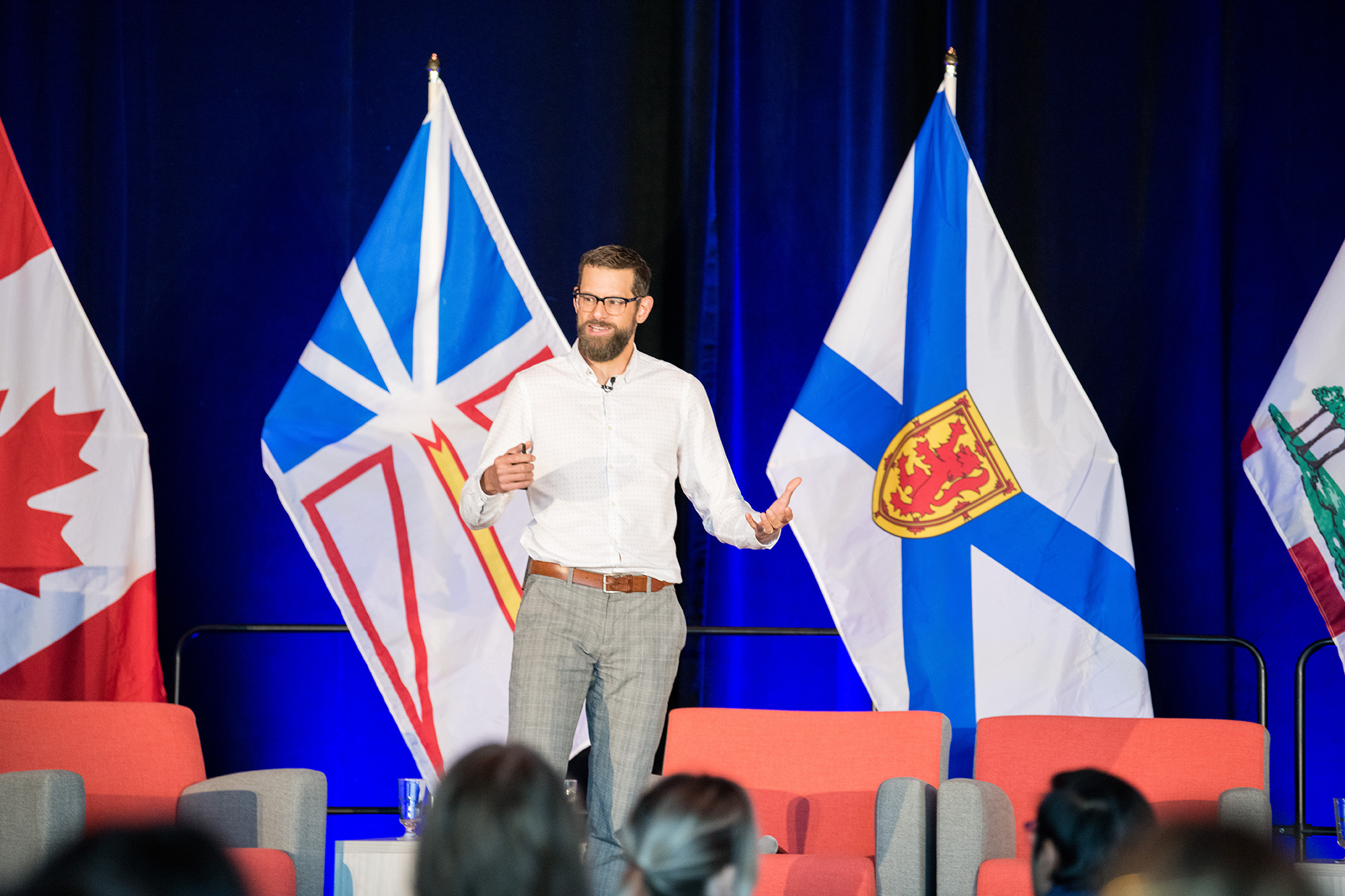 Tackling the refugee crisis with careers in tech

Access to talent can determine whether a rapidly growing company succeeds or fails. Skilled workers are a vital resource for startups, and in the tech sector, securing top talent is as competitive as battling it out against other companies for market share.

But what happens when you’re looking to recruit top talent, and local candidates don’t quite make the cut, or you have trouble filling the role?

For Waterloo-based Bonfire Interactive, they decided to look elsewhere, with the help of Talent Beyond Boundaries (TBB), a Washington, D.C.-based NGO, that is turning the “mis-connection” of the refugee crisis and talent shortages into an opportunity to change lives and help companies thrive.

“In Waterloo Region, we consistently have over 2,000 tech roles that are open, I’ve had roles that have been open for months where we tried to find the right person,” Kris Braun, Bonfire’s VP of Engineering, said during his talk at Innovate Atlantic last month.

Braun shared how Bonfire is always searching for the best talent to recruit. With Waterloo Region serving as one of Canada’s most active startup ecosystems, he knows first-hand how tough it can be to attract and retain the right tech talent.

“I think about talent pretty much every day,” he said.

He added that Bonfire is on a mission to reinvent public sector procurement; the product they are building requires an agile team, capable of tackling big problems, such as developing technology that models complicated data and creating user experiences that are frictionless.

“So if we were to tackle those kinds of problems without assembling the right kind of talent – the best team to tackle those challenges – there is no way that we would achieve either the scale we would want to impact in terms of that huge market, or the depth that we want to go in terms of solving those problems,” Braun explained.

This is a reality for not only Bonfire, but every innovation-driven enterprise across the country. Talent is critical to building a thriving company, but it doesn’t appear that the talent shortage is going away anytime soon.

“It’s predicted that by 2035 in Canada, we will need 350,000 people from outside of Canada to choose to come and work in Canada to address skill gaps,” Braun advised.

Immigration and refugee resettlement is a strategy governments are leveraging to address talent gaps in priority industries. Since 2015, Canada has resettled more than 40,000 Syrian refugees and, according to Braun, the country will welcome 200,000 economic immigrants this year using existing, traditional immigration streams.

Even with the combined efforts of the Canadian government and other countries around the world, the refugee crisis is still a pressing issue of global scale.

“Currently, there are more people displaced, fleeing conflict and disaster than at any point in history since the Second World War,” he said. “… A fraction of a per cent are actually getting resettled into permanent places to rebuild their lives. It’s something that is of a scale that much more needs to happen and I think Canada could play a larger role.”

The problem, Braun suggested, is that current immigration streams don’t make it viable to hire skilled refugees; the economic immigration stream that many businesses in Canada rely on is unavailable to refugees for a number of reasons, and the humanitarian stream takes too long to make it possible for businesses to offer a job to candidates who won’t be able to start for two years – give or take six months.

So what if there was an innovative, new way to source talent and offer displaced people a new life in Canada? That’s where TBB comes into play.

Knowing that the Bonfire Interactive team would need another programmer in due time – with the help of TBB – the company became the first in Canada to pursue such a solution, that would grow their team and help bring a displaced tech worker to the country.

Mohammed Hakmi, Braun’s colleague at Bonfire, is a skilled worker who was displaced by violence in his home country of Syria. Braun shared Hakmi’s story as part of his presentation, noting that Hakmi excelled at computer programming in high school. After graduation, Hakmi enrolled in computer engineering at Al-Baath University, and while studying, ran a side hustle that brought a local book store online.

“All of this shattered in 2011,” Braun recounted, adding that Hakmi was writing a university exam when a rocket slammed into the building next to him.

“When he went back home, he could hear gunfire in nearby Clock Tower Square. Syria’s civil war not only threatened the safety of Mohammed and his family, it was likely that it would draw him and his brother into forced military service, and so they had to leave,” Braun explained.

Hakmi and his family fled to nearby Lebanon, finding refuge with an aunt in Beirut. As millions of Syrian refugees came to Lebanon, populus politics emerged and policies were introduced that limited the rights of refugees without status in the country.

“They couldn’t send their kids to public school; they couldn’t access health care – in fact, the only jobs they could legally hold were construction and farm labour,” Braun said. “Every day on his way to work, he would pass a sign that read, ‘to Syrian labourers, the hand that reaches for our jobs will be cut off,’ threatening that you do not have status to work in our country. Don’t try to take our jobs.”

Hakmi worked under the table as a software developer, being paid half the market rate, to support his family and complete his university degree – but there was no clear path to a more permanent place, according to Braun.

That changed when he connected with TBB. Hakmi first heard about the organization through a Facebook post, and later told Braun that it seemed “too good to be true,” and that it could have been a scam. But, they had an office in Beirut, and so Hakmi decided to check it out anyway.

“After overcoming those initial questions, he and the staff at Talent Beyond Boundaries worked for three years preparing Mohammed for international placement. They worked on job, language and interview skills,” Braun said.

Across the world from Hakmi, Omar Salaymeh, one of Bonfire’s co-founders, learned about TBB and brought the idea to the company’s CEO, Cory Flatt.

“ shared this global context and said ‘so Talent Beyond Boundaries has been working for a number of years. They want to make this happen and they are looking for the first company to take a leap and just do this thing.’ Cory thought about it for a short period and just said, ‘Yeah, we should do that,’” Braun explained.

When Braun started at Bonfire, one of his first assignments was to figure out how the company could hire through TBB, and now, thanks to Bonfire’s commitment to finding the best talent and TBB’s dedication to the work they do, Hakmi is a valued member of the Bonfire team.

“So you might be curious about what kind of challenges are present recruiting from a remote, refugee candidate pool,” Braun said. “How hard is it to do that recruitment and hiring process? Well, I can really share that there are advantages to this method that actually outweigh the challenges that you’ll often experience.”

Braun described how TBB’s talent catalog of 15,000 candidates offers a streamlined way of shortlisting potential hires. He explained how posting jobs usually results in resumes being submitted at random times, and how top talent are often sought out, rather than discovered through inbound applications.

But by using TBB, Bonfire’s team was able to block out time in their schedule and dedicate it to the hiring process without interrupting their workday. The interview process was similar to what you would expect, only over Skype and, sometimes, with a bit of flexibility on the hiring manager’s side for connectivity issues, language barriers and personal circumstances.

“At one point with one of the candidates, things were going really well and suddenly they stopped responding as we were conversing with them over email,” Braun described. “But when we found out a few days later that they had to suddenly had to return to Syria to help a family member in need, we happily rescheduled. A little bit of flexibility is needed, but it’s not that much and it’s actually part of the process of building a good trust-relationship with someone who could become part of your team.”

The one piece of advice Braun had for anyone considering hiring through TBB, was that take-home technical assignments are a great tool to use to gain a better understanding of a candidate’s skills and technical knowledge.

“We have long relied on domestically, but have had to scale them back because we find now candidates come and they have five other offers, and they don’t have the time or interest to spend time working on a special assignment on their own time,” Braun explained. “Instead, with TBB, the candidates were all too eager to show off their skills. With Mohammed, it was how we knew we had this stellar candidate on our hands.”

Bonfire’s TBB experience and Hakmi’s story are clear signals that there is a real opportunity to both address the tech talent shortage and improve the lives of displaced individuals. There is still much more work needed to solve the global refugee crisis, but groundbreaking organizations like TBB and forward-thinking startups like Bonfire are proof that we can find common ground by working together to launch and lead innovative solutions that solve complex problems and improve lives.